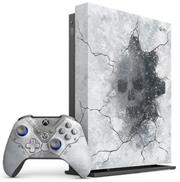 Xbox One X Gears 5 Limited Edition Console, Retail Box, No Warranty on Software
Note: Pre-order Item with Release Date: 30/09/2019
Product Overview
Never fight alone on Xbox One X - The world's most powerful console.
The Xbox One X Gears 5 Limited Edition bundle and bring the Gears universe to life with a console featuring a dark translucent casing that makes the Crimson Omen submerged in ice and snow designed by Gears co-creator Rod Fergusson and the Xbox team.
Join Kait Diaz on her journey to uncover her connection to the enemy and the true danger to Sera—herself.
Games play better on Xbox One X. With 40% more power than any other console, a library of over 1300 games, and true 4K gaming, games play better and are more immersive on Xbox One X.